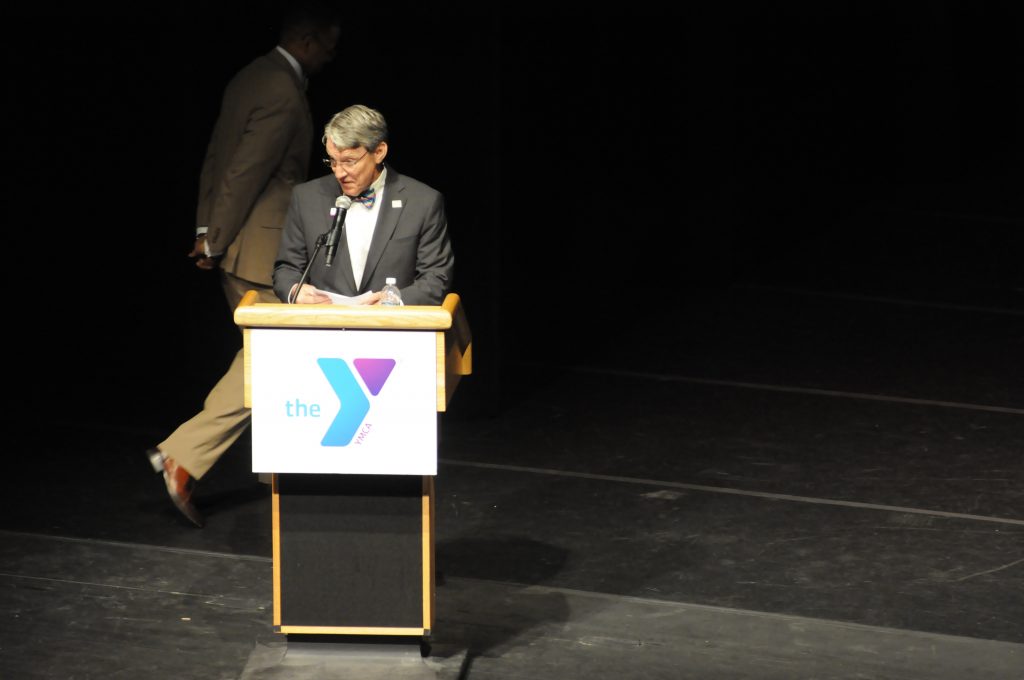 JACKSONVILLE, Fla. – March 1, 2017 – The YMCA of Florida’s First Coast honored volunteer Jim Overton for his service and contribution to the continuous growth of the Y by naming him Volunteer of the Year. Overton received the award at the 7th Annual Y-Bash held at the University of North Florida Fine Arts Center on Tuesday, Feb. 28.

Overton served nine years on the YMCA Metropolitan Board of Directors, including five years as the chairman. He also sat on the board of the Yates Family YMCA, now known as the Winston Family YMCA, from 1999 to 2006.

“From his days in Hi-Y to the time he volunteered as a member of the Metropolitan Board of Directors, Jim has played an active role in advancing the mission of the Y,” said YMCA of Florida’s First Coast President and CEO Eric Mann. “Jim’s leadership on the facility committee has been instrumental in helping the Y improve our services and positively impact more lives on the First Coast.”

Overton has been an ardent supporter of quality of life issues in Jacksonville. Throughout his career with the City of Jacksonville, Overton has made major improvements to city parks and dedicated his service to downtown redevelopment and revitalization.

YMCA of Florida’s First Coast recognizes its staff, volunteers and community partners annually at the Y-Bash, an event celebrating their community impact through youth development, healthy living and social responsibility. At this year’s event, the Y announced its funding priorities for the following year and its goal to raise $1.55 million. This year’s four funding priorities include:

Funding these priorities and the dedication of volunteers such as Overton help the Y build a strong, supportive foundation for the communities it serves. Past recipients of the Volunteer of the Year Award include Josh Harrison, Stephen M. Buente, John Curtin, Peggy Bryan and Greg Atwater.

For more than 100 years, YMCA of Florida’s First Coast has been providing men, women and children of all ages, and from all walks of life, opportunities to build stronger bonds, live healthy and become more engaged with their communities. Learn more: www.FirstCoastYMCA.org.