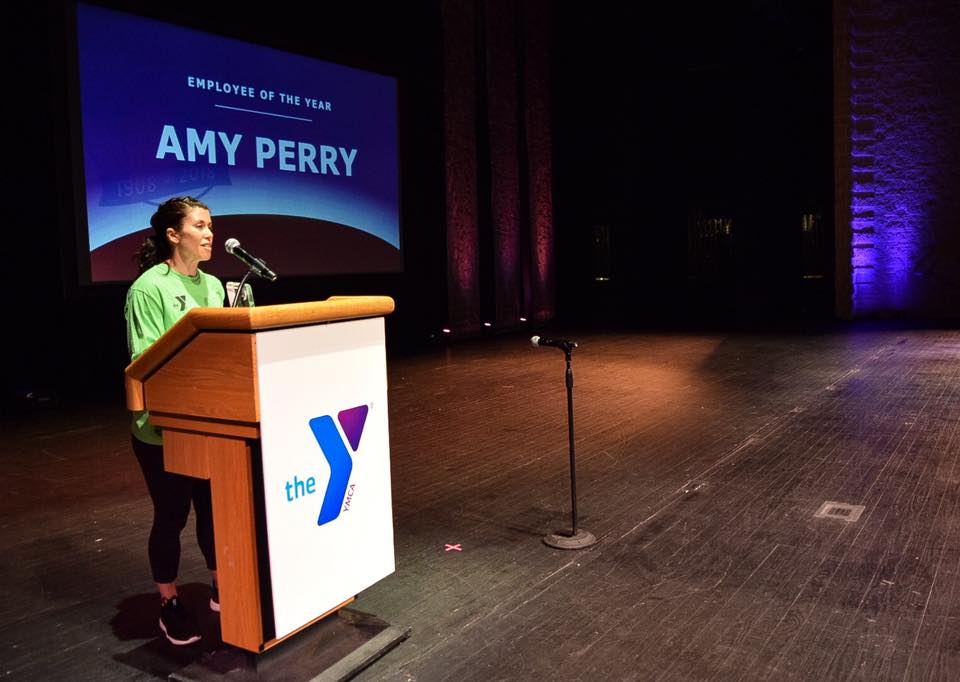 JACKSONVILLE, Fla. – February 28, 2018 – The YMCA of Florida’s First Coast proudly names Amy Perry, Group Exercise Coordinator at the Flagler Center YMCA, the 2018 recipient of the Carl & Rita Cannon Employee of the Year Award, acknowledging her passion, dedication as a leader to change people’s lives and commitment to the Y’s mission. Perry received the award at the 8th Annual Y-Bash held at the University of North Florida Fine Arts Center on Tuesday, February 27.

Perry first joined the First Coast YMCA in May 2008 as a Fitness Instructor for the Brooks Family YMCA. She was soon called upon to teach group exercise classes at other YMCA locations across the First Coast. In April 2017, Perry was promoted to Group Exercise Coordinator at the Flagler Center Y and has been instrumental in taking the group fitness experience at that location to a whole new level. She was also recently named the Les Mills Trainer of the Year. Les Mills is a global group fitness training organization with 130-thousand instructors in 19,000 facilities across 100 countries.

“Amy’s leadership has been invaluable in re-energizing the Flagler Y,” said YMCA of Florida’s First Coast President and CEO Eric Mann. “Amy goes above and beyond in every aspect of her work. She is dedicated to helping our members reach their wellness goals. She’s tough, but a master at motivation and we are grateful to have her as part of the YMCA family.”

YMCA of Florida’s First Coast recognizes its staff, volunteers and community partners annually at the Y-Bash, an event celebrating their community impact through youth development, healthy living and social responsibility. At this year’s event, the Y announced its funding priorities for the following year and its goal to raise $1.66 million. This year’s four funding priorities include:

Funding these priorities and the dedication of employees such as Perry help the Y build a strong, supportive foundation for the communities it serves. Past recipients of the Carl & Rita Cannon Employee of the Year Award include Jennifer Willett, Gwen Roberts, Tim Burrows and Norman Beverley.

The Y
In 2018, YMCA of Florida’s First Coast is celebrating its 110th anniversary of serving the Northeast Florida community through youth development, healthy living and social responsibility. For 110 years, YMCA of Florida’s First Coast has been providing men, women and children of all ages, and from all walks of life, opportunities to build stronger bonds, live healthy and become more engaged with their communities. Learn more: www.FirstCoastYMCA.org.