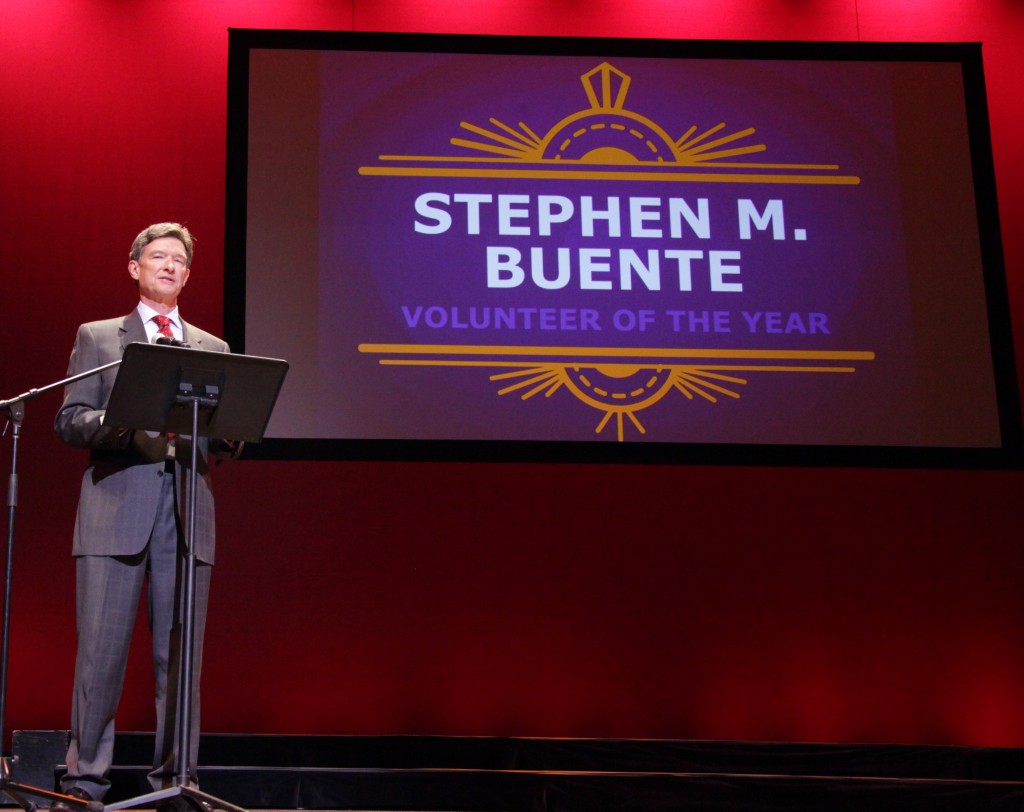 JACKSONVILLE, Fla. – February 25, 2015 – YMCA of Florida’s First Coast honored long-time volunteer Stephen M. Buente for his dedication and service to the Y by naming him Volunteer of the Year. Buente received the award at the 5th Annual Y-Bash held at the Florida Theatre on Tuesday, February 24.

In 2009, Buente joined the board of the St. Augustine YMCA and was selected to serve on the First Coast YMCA’s board of trustees in 2010. He brought his “hand-on” leadership approach to the Camp Immokalee Task Force this year. As Task Force chair, he led a group of volunteers who collectively gave more than 900 hours in the creation of detailed report and action plan to energize programs and facilities at Camp Immokalee.

“Buente is a long-time volunteer who is not afraid to get his hands dirty,” said YMCA of Florida’s First Coast President and CEO Eric Mann. “His commitment and exceptional work for Camp Immokalee is one of the many ways his service has enhanced our youth development programs. We are fortunate to have a volunteer with this level of passion at the First Coast YMCA.”

Long before relocating to the First Coast, Buente demonstrated leadership in volunteerism with other Ys. While living in Ohio, he served on the board of trustees for the YMCA of Greater Cleveland. In 2008, he was named Director Emeritus for the Cleveland YMCA in 2008 after chairing their fundraising campaign for two consecutive years.

YMCA of Florida’s First Coast recognizes its staff, volunteers and community partners annually at the Y Bash, an event celebrating their impact on the community in youth development, healthy living and social responsibility. At this year’s event, the Y announced its funding priorities for the following year and its goal to raise more than $1.6 million. This year’s four funding priorities include:

Funding these priorities and the dedication of volunteers such as Buente help the “Y” build a strong, supportive foundation for the communities it serves. Past recipients of the Volunteer of the Year Award include John Curtin, Peggy Bryan and Greg Atwater.

For more than 100 years, YMCA of Florida’s First Coast has been providing men, women and children of all ages, and from all walks of life, opportunities to build stronger bonds, live healthy and become more engaged with their communities.